The Tower of Babel

I chose to speak on the “Tower of Babel”.

1 Now the whole world had one language and a common speech.
2 As people moved eastward, they found a plain in Shinar and settled there.
3 They said to each other, “Come, let’s make bricks and bake them thoroughly.” They used brick instead of stone, and tar for mortar.
4 Then they said, “Come, let us build ourselves a city, with a tower that reaches to the heavens, so that we may make a name for ourselves; otherwise we will be scattered over the face of the whole earth.”
5 But the LORD came down to see the city and the tower the people were building.
6 The LORD said, “If as one people speaking the same language they have begun to do this, then nothing they plan to do will be impossible for them.
7 Come, let us go down and confuse their language so they will not understand each other.”
8 So the LORD scattered them from there over all the earth, and they stopped building the city.
9 That is why it was called Babel —because there the LORD confused the language of the whole world. From there the LORD scattered them over the face of the whole earth.

How many languages do you think there are in the world?

Apparently there are 7,111 languages are spoken today. Some have less than 1,000 speakers remaining. Meanwhile, just 23 languages account for more than half the world’s population.

The most popular language in the world is Mandarin Chinese. There are 1,213,000,000 people in the world that speak this language.

Next is Spanish with about 480 million native speakers.

English is third with 360 million native speakers, with nearly twice as many second language speakers. It’s also the official language of the sky – all pilots have to speak and identify themselves in English.

So you would think that in this country where we all speak English we should be able to understand each other?

There are so many different accents and regional variations in English that sometimes we find it hard to understand people.

When I was about seven years old we were on holiday in Norfolk and we went to visit my dad’s cousin Percy who was a farmer in the depths of Norfolk. His accent was so strong that I could hardly understand a word he said.

Some times we miss hear people and get what they are saying terribly wrong. Perhaps you’ve played the game “Chinese Whispers”?

Even if we don’t speak another language we can sometimes have a vague idea when we look at road signs or shopfronts as some words are similar in French, Spanish or Italian. However when we were in Greece last year we were flummoxed as their alphabet is so different.

The Bible tells us that ever since the Tower of Babel people have struggled to really understand each other. Babel is where we get our word “babble” from.

And many people think it would be a really great idea if everyone throughout the world spoke the same language.

Wouldn’t that be great?

You could speak to someone and they could understand you and you could get what they are saying.

So far mankind’s efforts to achieve this have never succeeded.

Mighty empires have come and gone, often with their attempt to have everyone speak the same language.

In 1887 Ludwik Zamenhof invented the language called Esperanto. It was hoped this could be a universal language. According to Wikipedia, there are some 2 million Esperanto speakers in the world. So that hasn’t gone very well.

How did we get to this state of having 7,111 different languages?

Let’s see what the Bible has to say about this.

A long time ago God was so upset with humanity and how awful most people had become he decided to do away with them. This is what we read in Genesis 6:5 – 7 “The LORD saw how great the wickedness of the human race had become on the earth, and that every inclination of the thoughts of the human heart was only evil all the time. The LORD regretted that he had made human beings on the earth, and his heart was deeply troubled. So the LORD said, “I will wipe from the face of the earth the human race I have created—and with them the animals, the birds and the creatures that move along the ground—for I regret that I have made them.”

However there was just one man and his family who wasn’t like the rest of mankind. Noah.

This is how he is described in the Bible: Genesis 6:9 & 10 “This is the account of Noah and his family. Noah was a righteous man, blameless among the people of his time, and he walked faithfully with God. Noah had three sons: Shem, Ham and Japheth.”

God told Noah to build an ark so that he, his wife, their three sons and their wives would be saved from the coming flood. They were also to take pairs of animals and birds on the ark.

Well, the Bible tells us that it rained for 40 days and the earth was flooded and everyone who was not in the ark drowned.

So mankind could start again without out all the terrible wicked people who had so upset God.

For a while all was well but within a few generations things had deteriorated.
Noah and his family had been told by God to spread out and repopulate the earth, yet we read that some decided to build cities and create kingdoms. The first reco

rded ruler was Nimrod who is mentioned in Genesis 10:8 – 12 “Cush was the father of Nimrod, who became a mighty warrior on the earth. 9 He was a mighty hunter before the LORD; that is why it is said, “Like Nimrod, a mighty hunter before the LORD.” The first centres of his kingdom were Babylon, Uruk, Akkad and Kalneh, in Shinar. From that land he went to Assyria, where he built Nineveh, Rehoboth Ir, Calah and Resen, which is between Nineveh and Calah—which is the great city.”

Nimrod was clearly not a nice man and to be honest many kings and rulers aren’t either.

So peoples have come to Shinar which is thought to be in modern day Iraq between two rivers: the Tigris and the Euphrates. They decide to settle down on this flat plain between the rivers and build a city. Even more they decide to build a tower.

It is thought that the Tower of Babel was probably a Ziggurat or stepped pyramid. A bit like a layered wedding cake with each layer smaller than the one below. The remains of one ziggurat found in the ruins of Babylon show that it was originally 91 metres high – about 300 feet. 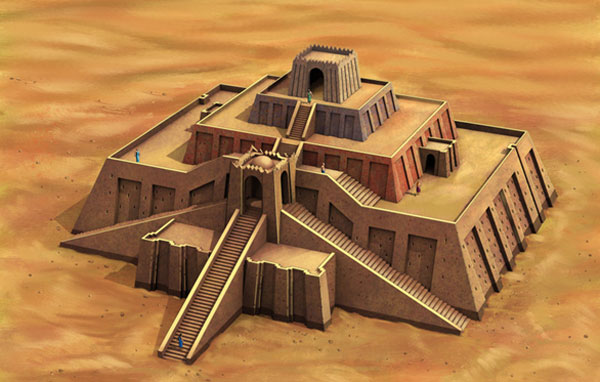 Ziggurats were huge buildings made of brick. And as we found in our Bible reading they made bricks and held it all together with tar instead of mortar.

If you recall from the story of Moses, the Israelites were slaves in Egypt and they were forced to make bricks which would go into all the major buildings in Egypt. Slaves were also used on the pyramids which were made of stone.

Even today there are people in slavery who work in the brick fields of India and Pakistan. In fact all around the world people are in slavery which is certainly not what God intended for men, women or children.

This tower is truly man made. The people wanted to make a name for themselves. They wanted people to remember them.

Its like people today who want to be celebrities. And a celebrity is just someone who is “well known for being famous”.

Fame doesn’t last for ever. We may recall famous inventors and scientists or even composers and writers or indeed sports stars. But who here knows the name of the man who invented the wheel? Or the name of the person who designed the first ship?

We remember people for a few generations. Very few of us will know the names of our great great grandparents.

Its far better to be known and loved by God. If you are a Christian then your name is recorded in the one book that ultimately matters, which in Revelation 20 is called the “Lamb’s Book of Life”.

All through the Old testament we read about altars and temples to the fake gods being in “high places”.

Well God sees what the people of Babel are up to and He decides to take action. Genesis 11:5 – 7 “ But the LORD came down to see the city and the tower the people were building. The LORD said, “If as one people speaking the same language they have begun to do this, then nothing they plan to do will be impossible for them. Come, let us go down and confuse their language so they will not understand each other.”

God then scatters the people across the world and they lose their common language. Their scheming to reach the heavens and become like gods comes to nothing.

History shows us mankind’s repeated attempted to reach out to God, whilst the Bible is the story of God reaching down to man.

Ever since empires have come and gone. In the life time of several people here we have seen the rise and fall of many empires and countries. The Third Reich that was to last a 1000 years ended in 1945 after some 12 years. The Soviet Union collapsed in 1989 and the British Empire faded away after the 2nd World War. There was a time when school atlases showed the British Empire in pink and it extended right around the world.

Kingdoms and Empires always think highly of themselves although many of the people in them are little better than slaves. God is not keen on countries like this and this is what he has said about them, in Isaiah 40:15 “ Surely the nations are like a drop in a bucket; they are regarded as dust on the scales; he weighs the islands as though they were fine dust.”

When you empty a bucket there is always a tiny drop in the bottom. Similarly if you have weighed ingredients such as flour on a set of scales there is always a little bit of flour left in the pan. And that is how God views these so called mighty countries.

God is not impressed by wealth or military might.

He is more concerned that people have a relationship with him. He loves people and that is why he sent his son Jesus to die for us, so that we can have a relationship with him . We can be known by him and be with him in heaven through out eternity. John 3:16 “For God so loved the world that he gave his one and only Son, that whoever believes in him shall not perish but have eternal life.”

But God’s plan to reconcile humanity with him and with each other will succeed as the Holy Spirit, given to each believer, works away in each of us to make us more like Jesus.
So whilst on earth we may be divided by different languages we are united in God’s Kingdom through the Holy Spirit.

I have been preaching the Word of God for more than 25 years. Also I am an Independent Christian Funeral Minister working mainly in the eastern outskirts of Greater London for the last 20 years. I have been married to Gaynor ( a very caring and dedicated nurse) for more than 35 years and we are blessed to have four sons and a granddaughter. So I am aware of many of the joys and sorrows of family life..
View all posts by davidfowlerpreacher →
This entry was posted in Talks and tagged flood, God, Holy Spirit, Jesus, Tower of Babel. Bookmark the permalink.