Off with his head

Today I preached at Nelmes United Reformed Church in Hornchurch. They follow the “Revised Common Lectionary” so I worked the Bible reading scheduled for today which you can find here: Mark 6:14 – 29.

The life of a prophet in Israel was always full of danger and not for the faint hearted.

John the Baptist is thought of as the last of the “Old Testament prophets”.

Jesus in Matthew 11:11 describes John as follows: “Truly I tell you, among those born of women there has not risen anyone greater than John the Baptist….”

The prophets told the people what God had to say to them. Sometimes it was things that the people had to hear, but didn’t want to hear.

In Hebrews 11 we read about men and women of faith and what was done to them because of their faith in God. “There were others who were tortured, refusing to be released so that they might gain an even better resurrection. Some faced jeers and flogging, and even chains and imprisonment. They were put to death by stoning; they were sawed in two; they were killed by the sword. They went about in sheepskins and goatskins, destitute, persecuted and mistreated“

According to Jewish tradition Isaiah the prophet was sawn in half whilst hiding in a hollow tree. He had clearly upset the then King Manasseh who amongst other vile crimes took part in the ritual sacrifice of children to the god Moloch.

Nobody ever seems to have volunteered to be a prophet. It was more that God chose them.

This is what we read about the call of Jeremiah in Jeremiah 1:4 – 10 “ 4 The word of the LORD came to me, saying, 5 “Before I formed you in the womb I knew you, before you were born I set you apart; I appointed you as a prophet to the nations.“ 6 “Alas, Sovereign LORD,“ I said, “I do not know how to speak; I am too young.“ 7 But the LORD said to me, “Do not say, ‘I am too young.‘ You must go to everyone I send you to and say whatever I command you. 8 Do not be afraid of them, for I am with you and will rescue you,“ declares the LORD. 9 Then the LORD reached out his hand and touched my mouth and said to me, “I have put my words in your mouth. 10 See, today I appoint you over nations and kingdoms to uproot and tear down, to destroy and overthrow, to build and to plant.”

It was not an easy life being a prophet. As being God’s messenger you had to deliver bad news to some very powerful people many of whom didn’t want to hear what God had to say to them. And sadly that is still true today.

The prophets were called to speak “truth to power” and that is what we Christians have to do today.

We have to be salt and light in society.

We have to tell the unpleasant truths. To misquote the well known fairy tale, we have to say that the Emperor’s new clothes don’t exist and that he is in the “all together” even if powerful people don’t like it.

We are fortunate that our Queen is a Christian, but sadly many of our politicians are not, and they take their inspiration and guidance from many other sources. They seem to listen to the vocal minorities who shout the loudest   and ignore what God has said. And so we see the flouting of God’s word is so many areas of public life. At times its getting to the 1960’s catch phrase “If it feels good, do it!”.

And sadly some parts of the church go along with this view as they argue “all you need is love” and assume that anything people say is love is okay.

So lets see what happens with John the Baptist.

John was a miracle baby. His parents were past child bearing age and I am sure that his mother Elizabeth in particular had suffered the shame of being childless. In those days having a large family was taken as a sign of God’s blessing, so you could wonder what was wrong with a couple who had no children.

And yet as we know completely out of the blue, in human terms, John’s father Zechariah, a priest,  receives a visit from an angel whilst he is burning incense in the Temple.

We read in Luke 1 the job description for John: “Do not be afraid, Zechariah; your prayer has been heard. Your wife Elizabeth will bear you a son, and you are to call him John. 14 He will be a joy and delight to you, and many will rejoice because of his birth, 15 for he will be great in the sight of the Lord. He is never to take wine or other fermented drink, and he will be filled with the Holy Spirit even before he is born. 16 He will bring back many of the people of Israel to the Lord their God. 17 And he will go on before the Lord, in the spirit and power of Elijah, to turn the hearts of the parents to their children and the disobedient to the wisdom of the righteousCto make ready a people prepared for the Lord.”

John’s reaction to the angel’s message about the baby is quite understandable “You’re having a laugh mate!”.

After that Zechariah is struck dumb until the baby was born.

Something I had never thought of before is that the angel says Zechariah’s prayer has been heard. He must have been praying for a child for many many years. And yet quite unexpectedly his prayer is answered. It teaches us to persist in prayer even when we think the situation is hopeless.

We don’t hear again about John until he starts his ministry around the year 29.

John served as the forerunner or herald of the Messiah and was to prepare for him by fulfilling an Elijah‑like role by calling the nation to repentance. In Luke 3:3 – 6 we are told “3 So John went throughout the whole territory of the Jordan River, preaching, “Turn away from your sins and be baptized, and God will forgive your sins.” ” As it is written in the book of the prophet Isaiah: “Someone is shouting in the desert: “Get the road ready for the Lord; make a straight path for him to travel! 5 Every valley must be filled up, every hill and mountain leveled off. The winding roads must be made straight, and the rough paths made smooth. 6 The whole human race will see God’s salvation!‘ ” 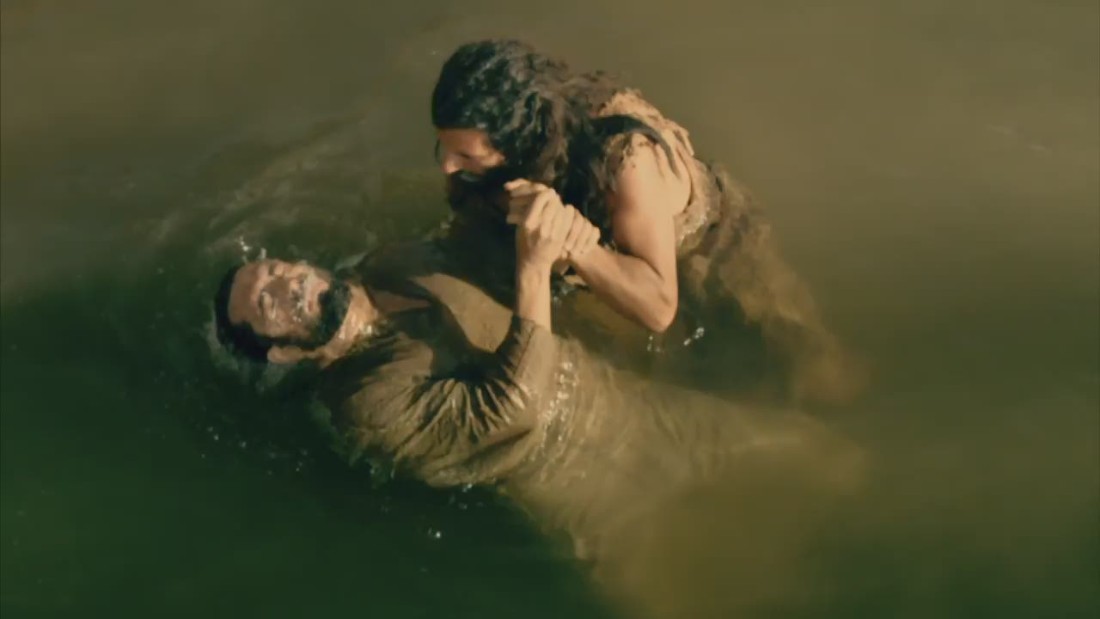 John baptized people as a sign of their repentance.

John was approached by some poeple who the religious authorities would have said are beyond hope. But whilst we may write people off, God never does. As we know from Jesus’ encounter with the thief on the cross, people have until their dying breath to repent and seek forgiveness.

This is how John dealt with these people (Luke 3:12 -14)  12 Some tax collectors came to be baptized, and they asked him, “Teacher, what are we to do?” 13 “Don’t collect more than is legal,” he told them. 14 Some soldiers also asked him, “What about us? What are we to do?” He said to them, “Don’t take money from anyone by force or accuse anyone falsely. Be content with your pay.”

John doesn’t tell them to give up their jobs, but he tells them to do them properly, not trying to make a bit on the side. Be honest in your business dealings with others. There still is a culture in society of trying to avoid paying tax or its alright to steal office stationary etc.

I am paid a high percentage of my fees in cash and some colleagues tell me I am stupid to declare to the Inland Revenue everything I earn. But I am answerable to the highest authority in all creation. I must be honest in my dealings. And yet a good number of years ago there was a retired minister who conducted many funeral services a week often having the cheques made out to different family members. This was he was able to buy a nice retirement home as well as a holiday home for his daughter. He obviously hadn’t taken to heed Jesus’ remark about paying taxes in Mark 12:17 “Then Jesus said to them, “Give back to Caesar what is Caesar‘s and to God what is God‘s.“”

So what had John done to get himself banged up in prison?

He had criticised Herod Antipas the ruler of Galilee for marrying his half brother Philip’s wife Herodias. Herodias wanted John dead for daring to criticise her actions. But it seems that Herod had him arrested almost as a sort of protective custody.

Herod liked listening to what John had to say even though it disturbed him.

We are not sure how long John was in prison but finally there came a day where Herodias could get rid of John once and for all.

At Herod’s birthday party, his step daughter Salome danced so amazingly well that Herod stupidly said she could have anything she wanted as a reward.

So at her mother’s prompting she asked for the head of John the Baptist on a plate. Herod having rashly promised her anything she wanted felt he had no choice but to agree and ordered John to be beheaded there and then.

If only Herod had engaged his brain before opening his mouth things may have been different.

How many of us are guilty of doing the same thing? We act on impulse without thinking or praying about a situation.

John had fulfilled his role. He had proclaimed that Jesus the Messiah was coming. He had urged people to repent of their sins and to be baptised.

He had also spoken truth to power.

As Christians we are Christ’s ambassadors also proclaiming the good news of the kingdom. But all Christians should be aware that persecution could await us. And sometimes it can come from within the church.

Recently a man was arrested outside St Paul’s cathedral for breach of the peace. He was reading aloud from the Bible and the cathedral authorities objected to him doing this.

However just as John the Baptist stuck to his role right to the end, so we should, aided by the Holy Spirit, be faithful to what Jesus has commissioned us to do, when he said in Matthew 28:19 & 20 “ Go, then, to all peoples everywhere and make them my disciples: baptize them in the name of the Father, the Son, and the Holy Spirit, and teach them to obey everything I have commanded you. And I will be with you always, to the end of the age.”

I have been preaching the Word of God for more than 25 years. Also I am an Independent Christian Funeral Minister working mainly in the eastern outskirts of Greater London for the last 20 years. I have been married to Gaynor ( a very caring and dedicated nurse) for more than 35 years and we are blessed to have four sons and a granddaughter. So I am aware of many of the joys and sorrows of family life..
View all posts by davidfowlerpreacher →
This entry was posted in Talks and tagged angel, Elizabeth, Herod, Holy Spirit, John the Baptist, life, Messiah, prayer, prophet, repentance, truth, Zechariah. Bookmark the permalink.

1 Response to Off with his head