Last Sunday (8th April 2018) I preached at my home church of Becontree Avenue Baptist Church. It was a week after Easter and so I felt it appropriate to talk about Good Friday and Easter although I did not chose one of the traditional Easter Bible readings.

Earlier in the service with the children we explored what to do when we couldn’t pay our debts ourselves. In fact we needed someone else to come to our rescue and save us. Which leads us on to our Bible reading from John’s gospel.

Just as Moses lifted up the snake in the wilderness, so the Son of Man must be lifted up, that everyone who believes may have eternal life in him.’ For God so loved the world that he gave his one and only Son, that whoever believes in him shall not perish but have eternal life. For God did not send his Son into the world to condemn the world, but to save the world through him. Whoever believes in him is not condemned, but whoever does not believe stands condemned already because they have not believed in the name of God’s one and only Son.

How much is something worth?

There are many people who know the price of many things but the value of nothing.

So how much is something worth?

We are all used to shopping. Buying food, clothes, household goods, cars, little treats, holidays etc. The list is endless.

Most of us pay the stated price. Of course some of us claim to have an eye for a bargain. The reduced section of the supermarket is often the busiest part of the shop.

And there is always Ebay where you can bid for the items on sale. You pay what you think something is worth.

Basically something is worth what someone is willing to pay for it. So a house in the catchment area of a good school is going to cost more than a house near to a failing school.

Or if you were really really thirsty you would pay me a fiver for my carafe of water here on the table?

Some of my time in banking, was spent in Debt Recovery trying to get back the bank’s money when things had gone wrong.

So a company may have spent £1/4 Million on a special piece of equipment for a particular contract. The company loses the contract and is in trouble. What cost £1/4 Million may make £25,000 in scrap value.

Or how but the £millions lent to a property company to build an apartment block with an underground garage which actually gave the bank a very expensive hole in the ground ! And who wants to buy a hole in the ground?

On occasions Gaynor has mentioned that various stores may have 50% off . My riposte was that I could save 100% !

I recall with horror the day in 1974 I found out that the price of Mars bars had gone up to 5p! And it was twice the size of the current Mars bar.

Everything has a price or a consequence. That became apparent too Adam and Eve right back in Genesis when sin entered the world. They lost their wonderful close relationship with God and death came to mankind.

Death has haunted mankind ever since. Many people are desperate to avoid it.

I was told by a man I visited that he sat with his cousin as she died. She was fighting desperately to live and was absolutely terrified. He said she was frightened by what awaited her the other side of death. She had done some truly awful and wicked things which I will not mention as there are children present. Maybe in those last moments she recognised that there was a price to pay for her sins. Paul reminds us in Romans 6:23 “…the wages of sin is death”.

Many people have a naive view of sin. They think they can get away with it. After all “it was such a long time ago”, or “it was only a little sin” or “I was only unfaithful the once”.

Really its like being at the check out at Morrisons and say to the cashier “I don’t have to pay for that as I put it in the trolley half an hour ago.” or “Oh its only a small tin of soup so it doesn’t count”.

The supermarket doesn’t work like that, neither does life.

If we think we can get away with spiritual shoplifting the Bible tells us in Hebrews 4:13 “ Nothing in all creation is hidden from God’s sight. Everything is uncovered and laid bare before the eyes of him to whom me must give account”

Lets be honest, we cannot help but sin. None of us is perfect, no matter how hard we try. Some try to live by the rules and regulations, but they still fail. The Pharisees were one such group who tried desperately to keep the rules yet failed.

You could say we are addicted to sin, and despite our best efforts we cannot break the habit.

I took the funeral for a middle age woman who had been an alcoholic – eight cans of Tennants strong lager a day for many years until 15 years ago she ended up in hospital with alcohol induced dementia. Each day she had consumed twice the recommended maximum weekly amount of alcohol. Her final years were spent in a nursing home not really aware of who she was or who her family were. Her family had tried what they could to save her but the addiction was too strong and overwhelming.

The same way sin holds us captive and enslaves us. We are not free to be who God made us to be. After all slaves have to do the biding of their owner whether they want to or not.

And so how do we pay for our purchases, our sins?

In our local supermarket we pay with money, be it cash, debit card, credit card, Apple Pay or any of the many other payment methods. What ever you call it, it is still money.

But what happens if we haven’t the cash or our cards are declined?

Unless some one intervenes and pays for our shopping we go hungry and the items go back on the shelves or into the chiller units and freezers.

But with sin we can’t put it back. We can’t unshop. It’s all there in front of us and we have to pay.

We have nothing we can use for payment. Some would say “I’ve been a good person so that should help” Or “look at all the good deeds I’ve done. That must off set the bad things”.

However God tells us the real worth of all our good deeds. We read this in Isaiah 64:6 “all our righteous deeds are like filthy rags”. The original Aramaic is more graphic.

The price for our sins have to be paid for us to be able to enter Heaven. God is holy and to enter heaven we too must be pure and holy, with no trace of sin.

We cannot pay the price ourselves and God realized that, and so he paid the price himself. 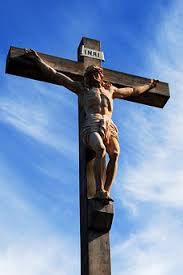 Of course it is our choice to accept or decline God’s offer to let Jesus pay for our sins. If we don’t we will spend eternity separated from God and from all that is good. And that is what God calls hell.

And in the Bible Jesus talks more about hell than he does about Heaven. He warns us about the reality of hell because God doesn’t want anyone to go to hell.

So in our “sin supermarket” we have two choices:

The great sacrifice that one off payment was made by Jesus on the cross on what we call Good Friday. Jesus is recorded as shouting out from the cross “It is finished!” which can be translated as “Paid in full” which of course used to be written on or stamped on invoices when payment was made.

And with his death the debts of all who put their trust in him, were paid and they were freed from the slavery and tyranny of sin.

Easter Day when Jesus rose from the grave emphasises the fact that the Son of God has broken the power of sin, death and the devil and that mankind need be slaves no more.
Sadly many people chose to stay in slavery to sin. They enjoy their lifestyle and don’t want to think about the eternal consequences of their actions.

Others think they are beyond salvation. God can’t possible forgive them. If the sacrifice that Jesus made is not big enough for them, then nothing is. There is nothing else in all creation that can pay the price of sin.

And for those who follow other religions, other belief systems do they really have a practical solution to the problem of sin?

In John 14: 6 Jesus is quoted as saying “I am the way and the truth and the life. No one comes to the Father except through me.”

Sincere as these people maybe, if they leave Jesus out of the equation they will get nowhere, and certainly not to heaven.

People condemn themselves to hell. God in the end lets them have the consequences of their choices and actions. If you reject Jesus then you choice where you are going to spend eternity.

So to return to the question “How much?” God says that you and I are so special and precious that he was willing to pay the price for our sins, and that was the death of Jesus.
And only you can decide to accept the offer. Only you can say whether believing and trusting in Jesus is worth it.

God doesn’t want you to spend eternity anywhere but with him in heaven.

“For God did not send his Son into the world to condemn the world, but to save the world through him.”

I have been preaching the Word of God for more than 25 years. Also I am an Independent Christian Funeral Minister working mainly in the eastern outskirts of Greater London for the last 20 years. I have been married to Gaynor ( a very caring and dedicated nurse) for more than 35 years and we are blessed to have four sons and a granddaughter. So I am aware of many of the joys and sorrows of family life..
View all posts by davidfowlerpreacher →
This entry was posted in Talks and tagged God, heaven, hell, Jesus, sin, sins, slaves. Bookmark the permalink.