Chosen for a purpose

Having the previous week talked about Israel’s desire for a king and how disastrous it was, I preached this time on King David who was probably the best King they had.

Last week we looked at the time the people of Israel asked for a king. If you remember, the prophet Samuel warned the people what would happen if they had a king. But they were insistent and God eventually allowed them to have a king.

Nearly all the kings were simply appalling. They led the people astray, away from God and into all sorts of trouble.

It wasn’t all doom and gloom however. There were some good godly kings.

The first was David. He took over as king when Saul, the first king, died in battle.

David was in fact king in waiting for many years as we shall see.

I think this is a great encouragement for all of us, especially when we feel that God has called us to a specific role and we are just waiting and waiting for the day we can do the job he has called us to do.

Saul started out well enough but had turned out to be a man who went his own way rather than God’s way.

God had enough of Saul and washed his hands of Saul. We can read about that in 1 Samuel 15. In fact we read at the end of that chapter these words: “Until the day Samuel died, he did not go to see Saul again, though Samuel mourned for him. And the LORD regretted that he had made Saul king over Israel.“

So God sends Samuel to anoint a new king. Samuel had previously warned Saul that this would happen in 1 Samuel 13: 14 “But now your kingdom will not endure; the LORD has sought out a man after his own heart and appointed him ruler of his people, because you have not kept the LORD’s command.”

Anointing meant setting someone aside for God’s purposes. Often the per

son has oil poured over their head. In Leviticus 8 we read how Aaron and his sons were anointed by Moses to be God’s priests.

Psalm 133 makes mention of the anointing of Aaron and compares it to the blessings of God’s people living together in unity:

1 How good and pleasant it is when God’s people live together in unity! 2 It is like precious oil poured on the head, running down on the beard, running down on Aaron’s beard, down on the collar of his robe. 3 It is as if the dew of Hermon were falling on Mount Zion. For there the LORD bestows his blessing, even life forevermore.

Samuel is obviously carrying some oil, but I suspect not the entire seven litres mentioned above. You would get absolutely soaked having that lot poured over your head. With 15 kilos of ingredients dissolved in it, this would be a very sticky version of the ice bucket challenge that was all the rage a couple of years ago. A bit like having a washing up bowl full of Barbeque Sauce tipped over you.

Samuel has to step out in faith. All he knows is that he is going to Bethlehem and is to meet with a man called Jesse whose son is to be the next king.

You can imagine Samuel’s thoughts “How will I know how to anoint?” “Will he be obvious?” “I expect he will look like a king or a might warrior” “He will be a born leader of men”

When Samuel arrives we read this: 1 Samuel 16: 4&5  When he arrived at Bethlehem, the elders of the town trembled when they met him. They asked, “Do you come in peace?”Samuel replied, “Yes, in peace; I have come to sacrifice to the LORD. Consecrate yourselves and come to the sacrifice with me.” Then he consecrated Jesse and his sons The town elders were frightened. May be they felt that trouble follows God’s prophet. Maybe they had heard about the dispute between King Saul and Samuel.and invited them to the sacrifice.

The town elders were frightened. May be they felt that trouble follows God’s prophet. Maybe they had heard about the dispute between King Saul and Samuel.

However the townspeople seem satisfied with Samuel’s response and so they sacrifice the animal that Samuel brought him.

Then Samuel has Jesse’s oldest sons to pass before him. But God says no to all the young men. No matter if they are tall strong and looked the part.

I recall my days in banking when the most unsuitable people got promoted. The fact that the person rushed around all day with a bundle of files in their hands was interpreted as “look how busy and productive there are”. Someone who was loud and shouted at his fellow workers was seen as keen and passionate about the job. Whilst the ones who just quietly got on with their job were ignored and overlooked. And of course those who snuck out of the office for a fag break with the boss were often seen as suitable candidates for promotion.

Well, Samuel is introduced to Jesse’s sons who are there. But none of them is the right man, the future king. So Samuel has to ask, are there any others?

1 Samuel 16: 11 – 13  So he asked Jesse, “Are these all the sons you have?” “There is still the youngest,” Jesse answered. “He is tending the sheep.” Samuel said, “Send for him; we will not sit down until he arrives.” 12 So he sent for him and had him brought in. He was glowing with health and had a fine appearance and handsome features. Then the LORD said, “Rise and anoint him; this is the one.” 13 So Samuel took the horn of oil and anointed him in the presence of his brothers, and from that day on the Spirit of the LORD came powerfully upon David.”

Isn’t it a good job that Samuel listened closely to God and didn’t rely on his own instincts and anoint of one David’s brothers? We read briefly about them late in the story of Goliath the Giant whom David fights and defeats. Three of his older  brothers are there but they, despite the human qualities Samuel had noticed, didn’t volunteer to fight the giant.

David was a young man who saw that it was not only a physical battle but a spiritual one as well. Goliath was defying and mocking God. Yet no one else would take him on.

As we know from the Bible, David fought with Goliath using his own weapons, ones with which he was familiar, to defeat and kill Goliath. He had honed his skills with a slingshot in the desert looking after his father’s sheep, never dreaming that he would one day fight with a giant.

In truth nothing is wasted in God’s economy. He can and will use the skills and abilities you have developed elsewhere and apply them to the situation you now find yourself in.

Sometime after I was made redundant from banking, I was asked to help set up and run a Counselling Charity and here the admin, accounting, and computer skills I had learnt in the bank came in very helpful.

David didn’t always get it right.

He got into a very difficult situation with Bathsheba and to try and get himself out of it, had her husband Uriah put into the most dangerous part of a battle so that he died in action.

David found out that whilst you can hide your misdeeds, your sins, form other men and women, you can’t hide them from God. The prophet Nathan was sent by God to deal with David. David admitted he had done wrong and was forgiven by God. You can read Psalm 51 which David wrote about how guilty he felt and how much he needed God’s forgiveness.

Without a doubt, David loved God. 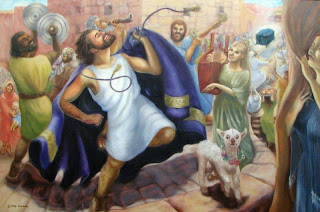 was brought into Jerusalem. 2 Samuel 6:14 – 16 “Wearing a linen ephod, David was dancing before the LORD with all his might, while he and all Israel were bringing up the ark of the LORD with shouts and the sound of trumpets. As the ark of the LORD was entering the City of David, Michal daughter of Saul watched from a window. And when she saw King David leaping and dancing before the LORD, she despised him in her heart.”

David is stripped down to his undies putting his heart and soul into worshipping God. His wife Michal (who was King Saul’s daughter) is appalled at his undignified behaviour. Perhaps she doesn’t actually know and love God.

I did have a family member who very condescendingly described modern worship songs as “Sing a longs”. She clearly had never been caught up in worship.

You may know the worship song “Undignified” by Matt Redman:

So David; not an obvious choice, from man’s point of view, to be king. But as our Bible reading tells us: “The LORD does not look at the things people look at. People look at the outward appearance, but the LORD looks at the heart.”

And if your heart is right with God, then be prepared for him to use you in ways you never thought possible.

I have been preaching the Word of God for more than 25 years. Also I am an Independent Christian Funeral Minister working mainly in the eastern outskirts of Greater London for the last 18 years. I have been married to Gaynor ( a very caring and dedicated nurse) for more than 35 years and we are blessed to have four sons and a granddaughter. So I am aware of many of the joys and sorrows of family life..
View all posts by davidfowlerpreacher →
This entry was posted in Talks and tagged anointing, David, God, King, Samuel, worship. Bookmark the permalink.