This morning I was again preaching at Becontree Avenue Baptist Church in Dagenham. My talk, like last week’s, is based on a post resurrection meeting between Jesus and his disciples, this time as recorded in John’s gospel.

Have you ever wished you could travel back in time and undo what you did?

In 1970 the soul singer Jimmy Ruffin sang “If only I could turn back the hands of time” in a song where a man laments breaking up with his lady friend.

Oh if only I had my time all over again I would have done things differently. I wouldn’t have taken that job, bought that car, said those things.

Years ago I prayed with a lady who as a young girl stole some money that her brother had saved up so he could go to scout camp. The family had very little. Dad had died and life was a struggle. And there was this absolute fortune. I think in was 10/- that the lad had saved from his paper round. What temptation. The girl took the money and spent it on sweets. Then when the boy needed the money to pay for camp it was gone. There was no way that the mum could stump up that sort of money and the heartbroken lad didn’t go to camp. However he gave his sister a look that haunted her for the next 50 years. It was only when we prayed and the lady confessed what she had done and said how sorry she was, that God through the Holy Spirit set her free from the guilt and shame of her actions.

I am fairly sure that Peter would have wanted to undo the past.

Before we look at what he did, lets first look at the man himself.

He certainly was a man of faith. One of the first of Jesus’ disciples. We first hear of him in John 1:41 – 42 “The first thing Andrew did was to find his brother Simon and tell him, “We have found the Messiah” (that is, the Christ). And he brought him to Jesus. Jesus looked at him and said, “You are Simon son of John. You will be called Cephas” (which, when translated, is Peter).”

Peter is the disciple who first recognises that Jesus is the Messiah. Matthew 16:15 – 18 “But what about you?” he asked. “Who do you say I am?” Simon Peter answered, “You are the Messiah, the Son of the living God.” Jesus replied, “Blessed are you, Simon son of Jonah, for this was not revealed to you by flesh and blood, but by my Father in heaven. And I tell you that you are Peter, and on this rock I will build my church, and the gates of Hades will not overcome it. “

y of us was someone who opens his mouth before engaging his brain, Just look at how he reacts on the mountain when he saw Jesus talking with Moses and Elijah.  Matthew 17:2 – 4 “  There he was transfigured before them. His face shone like the sun, and his clothes became as white as the light. Just then there appeared before them Moses and Elijah, talking with Jesus. Peter said to Jesus, “Lord, it is good for us to be here. If you wish, I will put up three shelters—one for you, one for Moses and one for  Elijah.”

Peter was a man who would make promises with good intentions without thinking things through. Whilst he had recognised who Jesus was, he didn’t understand Jesus’ mission.

Having just declared that Jesus was the Messiah, Peter opens his mouth and puts his feet in it again. Mark 8:31 – 33  “ He then began to teach them that the Son of Man must suffer many things and be rejected by the elders, the chief priests and the teachers of the law, and that he must be killed and after three days rise again. He spoke plainly about this, and Peter took him aside and began to rebuke him. But when Jesus turned and looked at his disciples, he rebuked Peter. “Get behind me, Satan!” he said. “You do not have in mind the concerns of God, but merely human concerns.”

So what did Peter do that was so bad?

The answer comes in Matthew 26:31 – 35 “Then Jesus told them, “This very night you will all fall away on account of me, for it is written: “‘I will strike the shepherd, and the sheep of the flock will be scattered.’ But after I have risen, I will go ahead of you into Galilee.” Peter replied, “Even if all fall away on account of you, I never will.”  “Truly I tell you,” Jesus answered, “this very night, before the rooster crows, you will disown me three times.”  But Peter declared, “Even if I have to die with you, I will never disown you.” And all the other disciples said the same.”

Peter has promised that he won’t abandon Jesus no matter what.

to the chief priest’s house. Peter denies knowing Jesus three times and as he does so the rooster crows.   Luke 22:60-62 “ Peter replied, “Man, I don’t know what you’re talking about!” Just as he was speaking, the rooster crowed. The Lord turned and looked straight at Peter. Then Peter remembered the word the Lord had spoken to him: “Before the rooster crows today, you will disown me three times.” And he went outside and wept bitterly.”

We all say things in the heat of the moment and make promises with the best of intentions, never dreaming that we may have to make good our promises. And this election season we hear all sorts of wonderful promises being made by those who wish to be our next government. And we get a bit cynical as we are told how wonderful life would be if only you vote for me.

For Peter his chickens certainly came home to roost.

We can only imagine how Peter felt as the rooster crowed and Jesus turned and looked at him.

Peter has been at the empty tomb that first Easter Day. In fact he went into the tomb when John stayed outside. I once heard an elderly catholic priest explain that John let Peter go first into the tomb as Peter was the senior disciple!

Peter has been there when Jesus appeared to the disciples in the upper room.

And now in today’s reading Peter is with the other disciples beside the Sea of Galilee, and they have been fishing. See John 21:1 – 14 Having fished unsuccessfully all night they at Jesus’ suggestion have one more go and the net is full to bursting. We are told that there were 153 fish

in the net which had nit burst despite the size of the catch.

Some scholars claim that at the time of Jesus it was thought that there were 153 nations in the known world. So the inference is that the good news of Jesus is for all the nations of the world and that there is room in the kingdom of God for all who are saved.

Jesus, who knows everything, knows that Peter needs to be forgiven and re instated.

Back when Jesus was arrested and put on trial, Peter had followed him but every time someone challenged him, Peter denied being a follower of Jesus. Each denial was stronger than the last. Just as Peter’s final answer to Jesus now is stronger than before. We read in v17 “ Peter was hurt because Jesus asked him the third time, “Do you love me?” He said, “Lord, you know all things; you know that I love you.”

And of course we know that Jesus does know everything. One of the prayers written by the church reformers many years ago reminds us of this. It starts “Almighty God, to whom all hearts are open, all desires known, and from whom no secrets are hidden:” 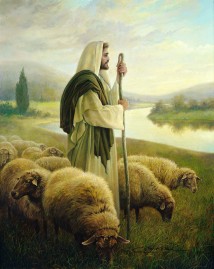 The lambs refers to those who are new to the faith and like little lambs they need to be fed and nurtured.

A good shepherd has to take care of his flock and keep them safe from harm and from those who would harm the sheep and steal them. And as we know from the epistles in the Bible the followers of Jesus came under all sorts of attack.

The adult sheep need to be taken to good pasture to feed. And it similar with all believers that they need to be fed on the word of God. It is true that not every plant is safe for sheep to eat so not every idea, philosophy or religion is good for the soul of the believer.

It is the shepherds job to keep his sheep safe and make sure they do not eat anything that is harmful to them.

The writer of this gospel records how Peter will die. In fact the tradition is that he was crucified upside down.

Even though Peter has the told to him, we know from history that he answers Jesus’ last command in this passage “Follow me!”

We see in Acts how effective Peter was in his role as one of the leaders of the early church. How he started taking the good news of Jesus out of the Jewish community into the wider world.

So today I feel that the message is: even if you have failed Jesus, you can be forgiven and restored.

If you need forgiveness just tell Jesus that you are truly sorry for what you have done and ask his forgiveness. We are told in 1 John 1:9 “ If we confess our sins, he is faithful and just and will forgive us our sins and purify us from all unrighteousness.”

And equally important is that Jesus has a job for each and everyone of us. If you are unsure what Jesus wants you to do, then spend sometime in prayer asking Jesus to reveal his will to you, or seek the help of other believers in discerning where you should be. And then like Peter be prepared to answer Jesus’ call “Follow me!”

I have been preaching the Word of God for more than 25 years. Also I am an Independent Christian Funeral Minister working mainly in the eastern outskirts of Greater London for the last 20 years. I have been married to Gaynor ( a very caring and dedicated nurse) for more than 35 years and we are blessed to have four sons and a granddaughter. So I am aware of many of the joys and sorrows of family life..
View all posts by davidfowlerpreacher →
This entry was posted in Talks and tagged forgiven, God, Holy Spirit, Jesus, resurrection, shepherd. Bookmark the permalink.